The council meeting moved along smoothly with all Councillors and Mayor present. My sense is that Council has developed into a rather mature group that is able to effectively and efficiently deal with the varied items that reach the agenda. Discussion was almost always productive and consistently move the agenda forward.

2.1.1 – a public meeting was held prior to the open session of council to consider the rezoning of a property on Fleck Street from a Residential Second Density (R2) zone, to a Special Provision (SP) zone, to permit a three unit multiple dwelling. [A concern was raised at the meeting regarding where the waste water will be directed from this property with the suggestion that it should be directed towards Railway Drive rather than through the backyards of neighbours to Melissa Street. No letters were noted as received. Council will make a decision on this rezoning application.]

Taylor Elgie the new planner was introduced.  There were no notable questions asked of Staff.

4.1 – Jim MacCoubrey, President, 4-H Club, a letter regarding the preservation of nature and trees in Parry Sound parks and beaches.

4.2 – Keith Smith & Jim MacCoubray, a letter regarding a request to sit on a Parks Committee of Council to establish where and what type of trees could be planted in memory of a loved one.

4.4 – Alicia Macklin, a letter with a request to establish an ice cream tricycle business in Parry Sound that would be permitted to operate on the Rotary Algonquin Fitness Trail.

[Letters were noted and forwarded to the appropriate departments.]

[There were no deputations.]

Several of the councillors attended the recent AMO meeting in Ottawa and provided some insights from the meeting. No other notable issues were raised.

8.1 – A request that Parry Sound call on all levels of government to implement a national dementia strategy. [CARRIED]

9.1.1 – a resolution to accept the proposal from Tulloch Engineering to develop the engineering and design parameters for the reconstruction of the Fire Hall Retaining Wall in the amount of $24,550 +HST with an internal transfer of funds for this repair. [Carried] There was much discussion about whether this should be delayed until next year. The consensus was that getting the design process started this year would allow the cost to be properly estimated for the 2014 budget.

9.1.2 – a series of requests of Council to approve amendments related to the Accessibility for Ontarian with Disabilities Act.
1) Amend Customer Service Manual. [Carried]
2) Approve the Accessible Municipal Publications Policy. [Carried]
3) Implement the Public Space Design and Self Service Kiosks. [Carried]
4) Pre-budget approval of $40,000 for a new AODA compliant website. [Defeated] This was defeated on principle; Council felt pre-budget approval really was not appropriate for this type of expense. Instead Council chose to request Staff initiate a Request for Proposal for the new website (all agreed that an update of the website was necessary) for consideration in the upcoming 2014 budget discussions. There was much discussion and concern about the Town getting ‘hosed down’ (my words) by suppliers if they knew the Town’s initial budget ($40K).
5) Approval for an NOHFC intern at a cost of $6,000. [Carried]
6) Municipal Website Policy. [Carried]

9.3.1 – a request from a town resident to change their billing service from Metered Residential to Flat Rate Residential was sent back to Staff. It was decided that this was not a Council issue. However Council clarified and defined the terms by which a switch from metered to non-metered would be allowed. Those 126 or so residents who initially went on the metered water rate trial a decade ago will be permitted until November 1st to change their service back to unmetered. All new construction residences that were required to install water meters will remain on metered water with no right to switch to unmetered.

I wonder what Staff will do with the original request to move to unmetered water that started this whole discussion, as tis request did not originate from the original group of residences that were part of the metered trial. Rather they are a commercial property that became a residence.

Councillors expressed a number of different opinions on this issue. A couple wanted to let everyone move to unmetered if they wished, so as to keep taxpayers happy. There was another group who felt that moving to metered water was the environmentally right thing to do and that backtracking was not consistent with this philosophy. In the end it seems the ‘keep the taxpayers happy’ sentiment prevailed.

9.4.1 – a recommendation from the Waterfront Advisory Committee that Council adopt a new Town of Parry Sound corporate logo. [Defeated]  Council did approve a resolution to secure additional public input regarding the proposed logo prior to further review by Council.

9.4.3 – the rezoning application of K & C Hall Holdings on Louisa Street. [Withdrawn]. It will be on the agenda of the September 17th meeting.

9.4.4 – a recommendation that the request for modification of Draft Official Plan concerning K & C Hall Developments be postponed until the September 17th meeting of Council to permit time for provincial input. [Carried]

9.4.5 – a resolution to allocate funds from the Smelter Wharf Reserve Fund for the approved repairs to that same wharf. [Carried]

9.6.1 – a resolution to have building department staff investigate the feasibility of a Lot Grading Plan Submission policy for new residential builds in Parry Sound. [Carried] This follows some local flooding in Parry Sound this summer after heavy rainfalls that have required Town personnel to make repairs. Presumably this work is required because of insufficient or inappropriate grading of certain private properties.

10.1.1 – an agreement to provide by-law enforcement to Carling Township at terms consistent with those outlined by Council at a meeting earlier this year. [Carried]

10.4.1 – a by-law to remove the holding provision for the ’Age in Place’ development property and follows the completion of various tasks including the town’s assumption of College Drive as a public street. [Carried] I understand that the development is moving forward, which is good news in my opinion.

10.5.1 – a by-law to formally approve the closure of the entrance/exit to Burritt Street. [Carried]

The meeting was finished by 9:30 and the use of the electronic documents did not seem to negatively impact the session. That’s good news because I’m very happy with the move to e-documents. 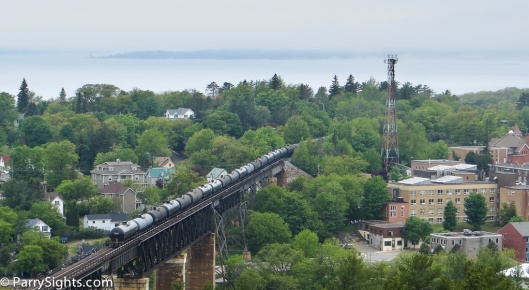