The big issue this meeting is the Parry Sound Hydro / Lakeland Energy merger. I have been hearing a couple of concerns from people in town concerning the merger. Hopefully they will choose to express their concerns tonight at the open meeting being held at the Bobby Orr Community Centre (December 2nd, 7:00). My sense is that we can either trust the board’s recommendation to merge and expand the Cascade Street facility, go alone with the financing and construction of the expansion, or do nothing and just keep up basic maintenance. The last choice seems an eventual dead end and I’m not sure we can afford the second (cost and risk), so the first seems to be the best choice. Can we negotiate a better deal? Perhaps but that would mean another round of discussions, a new agreement and then approval from all of municipalities who are shareholders of Lakeland Power. Plan on another year if that’s the choice.

There is nothing significant, see the online agenda for full information.

There is nothing significant on the Consent Agenda.

9.1.2 – a request to purchase eight track chairs for EMS, at a price of $21,490.57. [These are devices to which patients can be strapped and moved up and down stairs. It reduces the physical demands of moving incapacitated patients. And patients aren’t getting any smaller, so this can make the job safer for all involved.]

9.2.1 – an update on OPP police costing. [This item doesn’t seem to ask Council for any approval but simply summarizes the benefits to Parry Sound of the proposed OPP costing model. Apparently the policing costs to Parry Sound would be reduced by about $1.5 million under this new model which would help offset the upcoming reductions in provincial policing subsidies the Town receives. I’ll probably post a separate article on this in a week or so discussing the issues and the concerns expressed by our neighbouring municipalities.]

9.2.2 – Council approve the revised REDAC Terms of Reference. [It’s my sense that the revised terms loosen the ‘authority’ that REDAC has over the communities in terms of planning. Under the revised terms REDAC will facilitate the exchange of information related to regional development rather than try to align the direction of the various municipalities. I’m not sure if this is a rejection of REDAC or the concept of closer co-operation between the municipalities.]

9.4.1 – a request for $14,340 plus taxes for INCON Construction Ltd., to repair the Town Dock kiosk decking. [This seems to involve structural in addition to cosmetic repairs.]

9.4.2 – a pair of recommendations concerning the Town’s slogan and corporate image. [After some consultation with the community and relatively limited input Staff is suggesting that Council approve the revised logo below. Staff suggests it’s a ‘tweak’, and I would agree. In the absence of a full professional redesign process it works to tie together current logo elements with the stylized compass rose used on the road signs. With regard to a slogan it seems Staff is suggesting that ‘Sound of ….’ with varying suffixes be used to promote different features of the Town. Might I suggest ‘Nature’ as in the ‘Sound of Nature’ or perhaps ‘Water’, or ‘Vacation’ or ‘Trains’ (no, no, no – strike that last one!)?]

9.4.3 – a resolution to deny a deposit refund to the Algonquin Regiment Veteran’s Association, and a resolution to deny a request from the Algonquin Regiment Veteran’s Association to place a directional sign at the Stockey Centre directing people towards the Memorial. [I’ll be interested in seeing how this one is decided by Council, nickel, dimes and principles are on the agenda.]

10.1.2 – an update to the Town’s dog by-law as reviewed at an earlier session of Council as well as the application to the Chief Justice of Ontario Court of Justice for the revised fines. [I don’t see any issues here, it seems to follow the earlier discussions and approvals.]

10.2.1 – two by-laws; the first to execute a Merger Participation Agreement between Parry Sound Hydro Corporation (Holdco) and Lakeland Holding Ltd., and a second to execute a Shareholders’ Agreement between Parry Sound and Lakeland Holding. [This is the big item on the agenda, I wonder if it will be brought forward in the schedule.]

10.3.1 – approval of three-year multifunction copier/printer lease agreements with Near North Business Machines as previously approved by Council. [Just a matter of dotting i’s and crossing t’s.]

That’s it. See you Tuesday night.

I couldn’t resist slipping in this image. It’s from the Algonquin Rotary Fitness Trail, and taken this summer. Oh, the deception possible with photography software. 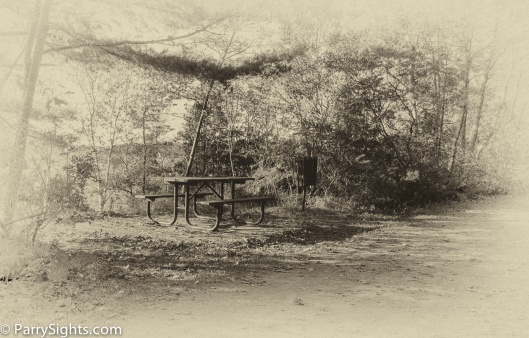 Note: Not all agenda items are covered here. I typically skip items that have little material impact on the town. These items include simple requests for Tag Days (permission to canvas), Awareness Weeks/Months, road closures for civic events, and the like. Want to see everything that is on the agenda? The full agenda can be found at the town’s website (http://townofparrysound.com/pagesmith/14).