Well after Tuesday night’s meeting of Council I have come to understand that when it comes to the Town it’s better to miss deadlines than it is to meet them. Better to apologize or obfuscate than lead. Budget’s falling behind? That’s okay we’ll cram. There may be mistakes and too little time spent on the details but it will get done. In breach of AODA legislation? Well it’s not really fair anyways and we’ll get around to it.

After a day to think about it I realize I was sorely disappointed with the way the Mayor dressed down volunteers at Tuesday night’s deputation. [Full disclosure, my wife was one of the volunteers.] Their transgression? Putting together a preliminary plan for a Market Square Park upgrade to provide for a more people friendly location and applying for TD Green Streets funding without running it by Council. The application was filed a week or two ago to meet the application deadline and the plan was presented to Council at their first meeting of the New Year (there is only one in January). Interestingly this is a no lose situation. The Town can always turn down the funding if the application is successful.

Lead, follow or get out of the way. But don’t get ahead of Council or you will be reprimanded in public.

This really was out of character for the Mayor and Council to criticize volunteers in a public session of Council. What’s going on? It smelled like a set up. Should we be provided with more information about what is being discussed in closed sessions of Council? There is a formal process for asking just those types of questions.

Councillors Reports and Questions of Staff

Nothing of real importance was raised.

4.2 – A request from the Royal Canadian Legion to support advertising in the Military Service Recognition Book being developed to recognize Veterans both past and present in print form. [This was later addressed as a Consent Agenda item. The Town agreed to take a $545 ad in the publication.]

5.2 – Lis McWalter-DBA and Anne Bossart regarding Market Square Park. [This had an interesting outcome that deserves some discussion and follow up. It’s not often that volunteers receive a public ‘dressing down’, but that was the case here. It seems the Mayor and Council are none too pleased with individuals with too much initiative. This was a case of no harm, no foul, but it seemed to have resulted in a 10-minute misconduct penalty. Some apologies were offered after the session but too little and too late in my opinion. Lead, follow or get out of the way; but if you choose to lead watch your back in Parry Sound. I’ll have more on this in a future post.]

Council agreed to an open meeting of Council on February 11th at 6:00 PM to review the 2014 budget. As was mentioned at the meeting things are more than a little behind schedule.

9.1.2 – Pre-budget approval – Hanging Flower Baskets. [CARRIED. Okay, how about we put an additional $15K in the 2014 budget to pay for hanging flower baskets in 2015? That way they can be ordered even earlier and we can avoid wasting Council’s time discussing whether it is appropriate to consider pre-budget approval items. Frankly I don’t really see why the outlines of a budget can’t be hashed out by Christmas. Yes, I realize the final numbers don’t come in until February but having watched the last two budgets being ‘cooked’ I have come to realize that 95% of the items that are actually reviewed and debated could be agreed with what is available to Council in October. And 75% of the Town’s budget really isn’t even up for discussion or review, it’s just a roll-over from the previous year with cost of living increases. I simplify, but not very much.]

9.1.3 – Public Transit System and achieving AODA compliance. [CARRIED. After much ‘hand wringing’ Council agreed to this direction but insisted that a letter be sent to the Province and surrounding communities letting them know this is ‘not fair’. It has been more than two years since the legislation was passed and only now are we letting the Province know we don’t like it? This is an item that was discussed a year ago with an agreement that a plan would be put forward by August of 2013. It’s now put off until August of 2014, with a proposed public transit service cut-off date of year-end 2014. How about we get Town Staff some help on this. We have no problem paying an engineering consulting group $25K to tell us how to fix a sagging gabion wall, how about some money getting a consultant in to help us with the public transit challenge. It’s an issue many communities are facing. I see that our neighbouring municipalities have hired a consultant to help them understand the issues of installing their own police force. That’s often the best way to address issues that are ‘one ups’ and require a specialized knowledge of legislation and available remedies.]

9.2.1 – Request to Amend the No Smoking By-law. That a ratepayer’s request to amend Bylaw 2012-6087, Smoking Bylaw, to include entrances at multi-unit dwellings in the smoking prohibition section, be denied. [CARRIED, which means the Town will not regulate smoking in non-public areas. The right decision in my opinion, it’s neither easy to judge nor would it be easy to enforce. If you have a problem speak to your neighbours and/or speak to your landlord. We shouldn’t expect that everything is covered by law or by-law.]

9.2.2 – Permit Parking Request. That the property owner’s written request for an additional parking permit in front of their building at 19 Parry Sound Road, be denied. [CARRIED, after some discussion. It’s a problem, but not one that should be fixed by having the Town demand other property owners give up their space. Once again it’s an opportunity to work with neighbours on a solution rather than expect the Town to legislate a solution.]

9.6.1 – Request for CN & CP Bridge Structural Engineering Reports. That Canadian National and Canadian Pacific Railways be requested to provide the Engineer’s Bridge Structure Report(s) for all the railway bridges within the Town of Parry Sound to the Chief Administrative Officer for the Town of Parry Sound. [CARRIED, with a couple of qualifications, all of which make sense.]

10.2.1 – Shared By-law Enforcement Services with The Township of the Archipelago. Being a Bylaw to execute an agreement between the Corporation of the Town of Parry Sound and the Township of the Archipelago for By-law Enforcement Services for a period of one year. [CARRIED. Council understood that this is a ‘sweet deal’ for our neighbours and asked Staff to review the actual costs of providing the services. This will be part of the decision process for any 2015 renewal. A couple of interesting figures were provided in the discussion; the Archipelago used less than 15 hours of By-Law services in 2013, while Carling used more than 250 hours. If we round that up to 300 hours (about 8 full-time weeks) and assume both municipalities pay $555 per month regardless of service use we can estimate an income of about $24,500 for the Town related to contract By-Law services. Well that will pay for the flower baskets but perhaps those eight weeks would be better spent addressing issues like meeting the Town’s AODA compliance obligations.]

I Get It. (Parry Sound in Black & White) 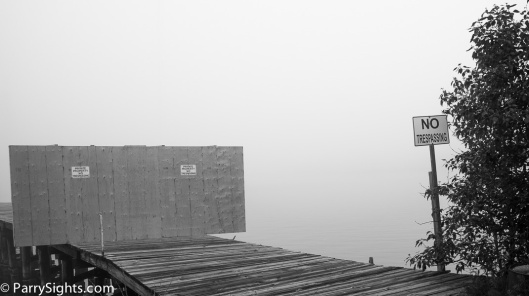 These notes review only those portions of the council meeting that I see as having greater importance or general community interest. See my agenda preview posts for additional comments.

The official minutes from council meetings are available at the Town of Parry Sound website, no later than the Friday following the meeting. The full council proceeding are available on video through Cogeco. Schedule details are available from the town office (705-746-2101).