It wasn’t Dwayne to LeBron, or Scotty to Michael, it was Rob to Don. And it was a pretty snazzy dunk. Too bad, but I’m calling it back on a technical.

It started out so innocently. Donald Sanderson had made his annual deputation to Council about the West Parry Sound Health Centre and its focus on customer service and support for the larger district. The presentation also discussed how important it was to retain the qualified staff who work at the hospital. It was a warm up for asking Parry Sound to once again make an annual contribution to the hospital for staff retention. This comes in the form of a direct donation and the waiving of certain taxes. All-in-all it costs the Town about $20K per year if I remember correctly. The other local municipalities also make contributions.

The alley-oop followed in the questions to Mr. Sanderson. After a few soft ball questions from Council the usually laconic Mr. Mens asked Mr. Sanderson if a swimming pool would help with staff retention. That was like a lob from mid-court to a player streaking towards the basket. Mr. Sanderson handled it like a pro. He suggested that a pool would not only help with attracting and retaining top quality staff but that it would also improve the overall health of the community. In just a few steps, I mean sentences, the ball was buried.

But, there was a technical foul on the play. Both Mr. Sanderson and Mr. Mens are not Parry Sound residents. Any swimming pool that were to be installed in Parry Sound would not impact their property taxes in the least. They both choose to live in the low tax municipalities of Seguin and McKellar and benefit from the infrastructure supported by the residents of Parry Sound. Carpetbaggers perhaps?

I expect to see more suggestion of a pool being a critical piece of infrastructure for Parry Sound’s success in the future. With a $3.9 million payment to the Town from Lakeland Power as part of their merger with Parry Sound Hydro Corporation, you saw last night where some individuals think it should be spent. It will be burning a very big hole in the pockets of several people on Council, town residents, and the regional carpetbaggers. Council has already allocated part of this windfall to defraying operating costs for 2014, and it seems intent on looking at using more of it to actually reduce taxes this year. That’s a pretty nice move in an election year. It’s only $37 per hour but it comes with a no-cut four-year contract, and some interesting perks.

All that’s missing is a swimming pool. Yeah, right!

What’s probably missing are schools where the kids score well on provincial testing and are equipped to succeed. As an individual who was transferred several times in my business career the three top issues we looked at when buying a home were: is the area safe, are the schools good, and how long is the commute. Sometimes we had to settle for two out of the three, with the commute being the loser in every case. In those cases where we scored on all three it was usually at the expense of higher property cost and taxes.

Mr. Mens, no more of those soft lobs to set up the Town for higher taxes. We already wonder how we managed to get ourselves in the situation of losing hundreds of thousands of dollars annually operating the Stockey Centre and the Bobby Orr Community Centre, often to the benefit of our ‘regional partners’. And now that we are digging ourselves out of a hole after much needed infrastructure investments the out-of-towners want us to consider building a pool? Local politicians, especially those in Seguin, love to point to Parry Sound as a high tax municipality with too much infrastructure. How about some of them getting together and building a pool for the benefit of the region’s swimmers? I’m pretty sure it’s no further for people from Parry Sound to drive to Humphry than it is for people from Humphry to drive to Parry Sound.

We pretty much have it all in Parry Sound. What we really need to pay attention to is the quality of our local schools in terms of student achievement. We fall well short in this regard. Medical professionals who have spent the better part of two decades in school will insist that their children have access to the very best education. A swimming pool, is a nice to have, not a need to have. The new elementary school is a start but the Town needs to look at what it can do to help teachers, and parents provide their students and children with the best possible education. It’s not building them a swimming pool.

A lay-up counts for two points, the same as an alley-oop. It’s not as pretty but it’s worth so much more if it isn’t called back on a technical. Let’s get back to basics and score effectively, if not spectacularly. 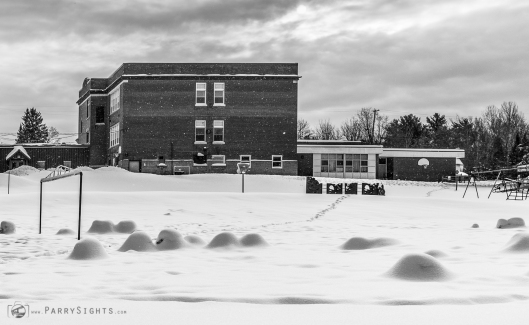