[See the last paragraph, after the photo for the correction. The original text has been highlighted with a strike through font.]

The Integrity Commissioner’s report of March 24, 2104 is worth reviewing in light of the Kangaroo Court session held by Parry Sound Council on March 25th. The Commissioner’s report and recommendations are not quite as nuanced as they may seem. Here’s a link to the report on the Town’s website (yes it’s there, go find it). Here’s a separate link to the report hosted at this site in case you have any challenges navigating the Town’s webpage and finding the correct report.

Reading the Report and then reviewing current Town rules and regulations it becomes obvious Council is permitted to dismiss any board or committee member, including the Chair of the Downtown Business Association, unilaterally as the rules currently stand. They are able to do this without any requirement to speak with the individual, and without cause. It can be done because enough members of Council don’t like the individual, they feel some sort of political threat, or if there is a performance issue. That’s because there are no rules or regulation of board and committee members and how they are treated.

It’s hard to discuss or negotiate changes in performance or behavior with a board or committee member if there is no actual issue or the underlying issue is personal dislike. But it is certainly possible, and advisable, to discuss performance issues and request a change. In the case of an impasse it’s always an option for the individual to resign. Being removed from a Board must be considered as being “dismissed with prejudice”. It’s a very public ‘slap in the face’ for what Ms. McWalter has contributed and accomplished as a volunteer in Parry Sound.

Can you imagine Council deciding to terminate a Town employee in a closed session of Council without any previous interaction with that employee at any level? It would immediately precipitate a lawsuit or a union grievance. People we pay to provide a service to the Town have protection from the capricious behaviour of Council, but not our volunteers?

This disconnect seems to be at the core of the Integrity Commissioner’s report and recommendations. Because there are no rules or regulations concerning the management of committee and board members the Commissioner was unable to find that Council was at fault in breaching these rules and regulations. No regulation or rule; no foul.

The Commissioner went on to recommend that Council develop the necessary rules and policies regarding the management of boards and committees. That was all the commissioner could do. Reading the report, and listening to the Commissioner’s presentation to Council, it did seem that she was annoyed with Council’s action with respect to the process by which they decided to remove Ms. McWalter from the DBA Board.

In the absence of rules and regulations can you imagine six members of council deciding to get rid of the seventh number? Heck, but for regulations it could be done with only three members of Council and the Mayor. And they could do it one Council member of a time. But they can’t, because there are rules and regulations. That’s why we, as a society, accept being governed by the rule of law.

That the appointment of Lis McWalter to the Downtown Business Association Board be revoked, effectively immediately.

After four years of remarkable success I believe Resolution 2014 – 056 will go down as a black mark on Council’s record. From where I sit as an involved member of the community the action of Council seems capricious and malicious.

I would like to offer a suggestion. Council should take a step back and reinstate Ms. McWalter to the Downtown Business Association Board. The DBA can decide whether or not she should remain in the position of Chair. Council and Staff at the same time can draft, discuss and pass appropriate rules and regulations regarding the management of boards and committees. With this information in hand Council can then meet with Ms. McWalter and discuss whether there is an issue under the approved rules and regulations. If there is an issue, a good faith attempt should be made to reach agreement on remedying the situation. If an agreement cannot be reached there should be the opportunity for Ms. McWalter to resign. We all don’t agree on everything, that’s why there are rules and regulations. Removing a member of a committee or board without their request should be the last route of action. These are volunteers, not Staff or Council who are paid for their services. They are not to be kicked around at the whim of Council.

Flying by the Seat of Their Pants? (Parry Sound in Black & White) 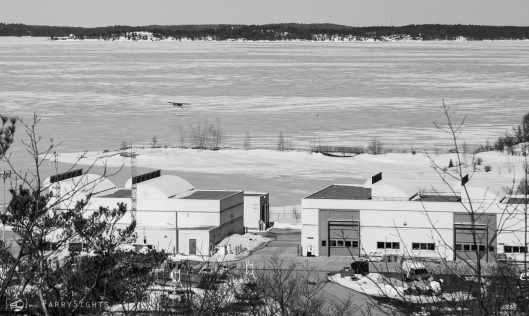 An aside, flying under the CP Trestle will get you in big trouble, but you’re okay flying a few feet off the ice. It’s all about rules and regulations.

Please note that I was incorrect in suggesting that Robert’s Rules of Order did not permit the chairperson to vote. They certainly do. Thanks to Ryan for pointing this out. Please take a look in the comments section for a discussion of the issue. I apologize for my confusion on this point of order.