Not at all. Nothing as benign as even poopy diapers.

There has been a fair bit of controversy between the railways, the federal government and local communities regarding disclosure of exactly what is on the trains rolling through towns and cities. The railways would prefer to provide that information once a year in a document that the local communities would keep confidential. Communities would know what has been moved through their town in the last year, but the residents of the town would not. The Feds and Communities have asked for a more realistic update on the contents of the trains and the railways seem to be bending, but once again do not want to have that information released to the general public.

Hey Mr. Railway CEO, it’s not really that confidential. Anyone who wants to take the time can sit beside the railway track and count the cars going by and mark down the content of the hazardous cars. That’s because all hazardous railcars are required to carry labels with the appropriate UN or NA Code. Those numbers in the diamonds (actually squares rotated 45 degrees) that you see on tanker cars and some tanker trucks on the highways, they tell you what’s inside. Sort of like the ‘Baby Onboard’ sign some parents hang in the back window of their car.

So, what’s rolling through Parry Sound? Besides grain cars, containers and automobile carriers there is some interesting and pretty nasty stuff. According to a very informal audit of what’s rolling behind my property (the CN line) this is what I’ve seen so far. This table lists the UN hazard code and the corresponding contents. 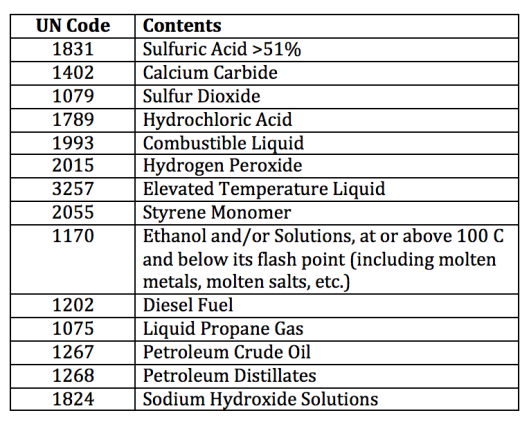 This is a very informal list of rail cars I have seen while outside and in a position to read the hazard codes. I may take some time and sit by the track (always on non-railway property of course) and see what other ‘numbers’ ‘roll by’.

The largest number of hazardous cars are 1267’s and 1268’s, with a significant number of 1075’s. One train had more than a hundred 1267 and 1268 cars strung together, crude oil and distillates, doubtless Bakken oil. I’ll offer an analysis on the energy implication of these tankers in a future post that will help explain the devastation seen in Lac-Megantic near future.

What about the northbound line that crosses the Seguin River over the CP trestle? I don’t have numbers for them but expect the tankers will primarily consist of processed chemicals heading back from the eastern refiners and chemical plants. I’ll see if I can get some numbers and pass them on in a future post. I guess the ideal spot to spend a day would be where the two tracks cross Isabella Street. You can watch them coming and going. I estimate that we have about 35 trains a day passing through Parry Sound heading north or south.

The refusal of the railways to release information on the hazardous materials they are transporting is consistent with their habit of hiding and obfuscating information. Are they lazy or just afraid of the public knowing what is being transported through their communities? Some analysts suggest it might be related to competitive concerns. Not likely, any of the rail companies could easily monitor the detailed activity of their competitors with a video camera. No, they just don’t want you to know what’s rolling through our downtown (you might be worried). But if we really want to know what’s going on it’s as simple as looking out our window and keeping track of things. 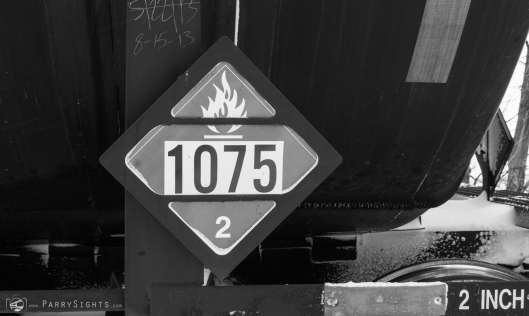 13 thoughts on “No Babies On Board”