Let’s start with the disappointing part of the meeting. Council agreed to the new ‘rules and regulations’ for committees and boards. In my opinion it was a ‘check the box’ effort by Staff. One Councillor pointed out that one section wasn’t even appropriate for Parry Sound as we did not have the referenced organizations. (It was quickly deleted.) The package basically was a poorly edited version of policies and procedures lifted from Orillia. In my opinion the lack of effort and interest was pretty obvious. One Councillor wanted to assure the public that this was not intended to be a means to gag (my word) the public. And of course the approved policies and procedures do nothing to prevent a similar abuse of a volunteer as was the case with the former head of the Parry Sound Downtown Business Association. Rules and regulations for committees and boards? ‘Check that sucka off the to-do list.’

Speaking of to-do lists, mention was made regarding the Request for Proposal for the Town’s website redesign. It went out a short while ago and the Town received multiple proposals. This has been shortlisted with interviews in the very near future. The alternative is to leave the website the way it is and offer classes at Canadore on how to navigate the current labyrinth.

On a positive note, it is obvious that Council cares about process (if it pleases them), resident concerns, and respecting past obligations. This was evidenced by Council’s decision to ‘review’ but not necessarily ‘reconsider’ the decision regarding their Marion Street right-of-way approval (Item 5.1). They ratified their commitment to an existing agreement regarding a grinder pump (Item 9.2.1). They also expressed concern and requested a report on the issue of sewer lines crossing through a private property on Hillcrest Avenue (Items 4.4 and 5.3).

Things worth noting that arose in either the Councillors’ reports or questions of Staff included:

On another positive note I saw a Council hopeful attend Tuesday night’s meeting and stay until the very end. I understand from others that it is standard protocol to attend at least one meeting before the candidates debate to show your seriousness. Why invest any more effort than necessary? Nobody notices (or do they) and you can just learn on the job. Why invest too much effort, you very well might not ‘get the job’? A good question for Thursday night’s candidates meeting might be – “How many full meetings of Council have you attended? What are the most challenging issues currently facing Council?”

4.4, 5.3 – Letter and Deputation regarding infrastructure (sewer) issues at 33 Hillcrest Avenue. ACTIONED. Council requested that Staff provide a report on the situation and presumably a plan of action. In this case the owner of the home revealed that she had been told the house was not saleable with the previously unknown sewer running through the backyard as it currently exists.

5.1 – Deputation regarding Council’s recent approval of a second driveway at 47 Marion Street. ACTIONED. Council was very responsive to the individual’s unhappiness that they were not provided with the opportunity to present their arguments against the right-of-way. Staff is requested to present the matter to Council once again. Council will then make a determination whether it should be formally revisited. An interesting figure arose in the deputation. It was suggested that an action at the level of the Ontario Municipal Board (OMB) might cost each party on the order of $150,000 to $200,000. A good incentive it seems for all parties to try and reach an amicable agreement and not head to the OMB.

9.2.1 – Resolution. Amendment to Site Approval Plan for Hands the Family Help Network. DEFEATED. Council felt that they should honour the original agreement regarding responsibility for the grinder pump reached some 25 years ago. The Town is responsible for the pump itself while the property owner (Hands) is responsible for the cost of the electricity to operate the pump. The facility upgrade can now proceed.

9.5.1 – Resolution. A 2015 budget preparation schedule. CARRIED. The January meeting date will be left to the new Council to decide.

10.1.1 – By-law. Updates and revisions to the Town’s Cemetery By-Laws. CARRIED. There was a change made in determining residency. If you own property in Parry Sound at the time of your death you are a resident for the purpose of cemetery fees even if you live and die elsewhere. Seems reasonable to me. It’s not as though the difference in cost is all that great, but it respects the support these individuals make to the Town through the payment of property taxes.

10.4.1 – By-law, Resolution and Direction. The amendment of By-law 2012-6138 to incorporate Boards and Committees. A Resolution to adopt the proposed Committee Rights and Responsibilities Policy. A Direction to forgo having the Integrity Commissioner present a governance and procedural information and education session for Council, staff, and Town board and committee members. A further Direction to have the Clerk and/or Deputy Clerk to provide the appropriate training to the new Council, boards and committees following the upcoming election. CARRIED. CARRIED. CARRIED. I don’t think Council and Staff really understand the importance of committees and boards to the community’s involvement in Parry Sound. There still is no ‘protection’ or due process for community volunteers. In reality the best way to get your opinion heard in this Town is to patronize one of the local stores. Now that’s old-fashioned customer service.

There was much more discussed and decided at Tuesday’s meeting, check out the official meeting minutes at the Town’s website.

Hoping for Some Infrastructure Love (Parry Sound in Black & White) 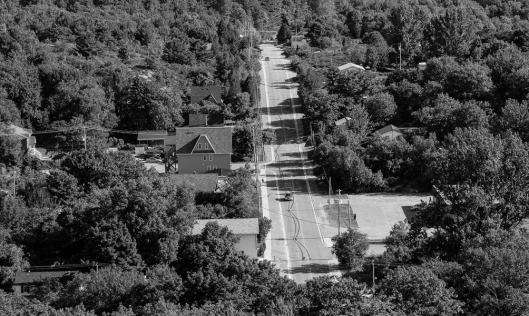