This is the first in a series of posts looking at the 2015 Parry Sound budget and budget review process. There is no defined order to the posts. I will offer thoughts and suggestions as I reflect on the budget and the public discussion that follows. This first post briefly covers Tuesday night’s meeting and raises an issue that seemed a common theme of the meeting’s deputations.

The meeting Tuesday night lasted about two and half hours, this included a bit more than an hour for some preliminary agenda items related to taxation ratios (more on this in a future post) and five deputations, three scheduled and two impromptu. The scheduled deputations concerned issues included in the budget review while the impromptu deputations were short and spoke to the earlier deputations.

Tuesday night’s meeting was the first time in at least the last four years that there were citizen deputations related to the draft budget. In the past it seems the budget discussions, while in open session, attracted no one beyond those paid to be there, Council, Staff and Media. It was almost like a backroom discussion because of the lack of public attendance. Last year saw members of the Citizen’s Finance Committee attend, and the media. The budget deliberations are not covered by Cogeco for broadcast. This year’s meeting was better advertised and the draft budget was available to the public at the Town’s website. As was mentioned by the Councillors at the meeting this year’s draft budget was easy to understand. So the budget process started off with more participation than I have seen in the past, although pretty much everyone left after the deputation portion of the meeting; a shame in my opinion because there was much to be learned in the back and forth between Staff and Council about the various budget items and their individual priorities.

The three deputations, by three separate groups (Museum, Library, Ranger Cabin), provided updates to what they accomplished in 2014 and what they intended to do in 2015 with the requested funding. All three deputations spoke indirectly to a theme that Council and Staff regularly ignore – education and creating a culture of learning in the community. It is an issue that I have previously commented on (Education – Did Not Attend) while grading Council and Staff’s performance prior to the 2014 election.

The Town spends hundreds of thousands of dollars annually to support a culture of physical health and sports. The investments include operating the Bobby Orr Community Centre, trails maintenance and planning, Waubano Beach, the many parks in Town for youth and adults, and financial contributions to the West Parry Sound Health Centre. There is also considerable direct and indirect support provided to arts in Parry Sound through the Stockey Centre, the Festival of the Sound, as well as subsidized social and cultural events. But where is there similar support for education and learning? Perhaps the public school system is supposed to take care of this. But are they really able to offer the resources necessary to foster a vibrant learning and success oriented community? School is work, not fun, for most children and families. Why do any more than you need to ‘get by’? And how much input does the community have with respect to the schools? It seems the school’s agenda is almost entirely directed by people in Queen’s Park and North Bay.

Is a focus on the physical enough to build a vibrant community? Is support for concerts and playgrounds all that is necessary to build a healthy community?

In my opinion, no!

But it can be argued that we do offer some learning and educational opportunities through support of a library and museum. The Library has a budget on the order of $300,000 of which the Town provides about $150,000 annually. The Museum is supported to the tune of $25,000 by the Town of Parry Sound and is asking for an additional $5,000 to bring the total to $30,000. This pales in comparison with the money spent by the Town on the Bobby Orr Community Centre, the Stockey Centre and our parks.

The overall academic scores for children in our local schools rank in the bottom half of the province. In one case it’s in the bottom tenth of the province. This is not the kind of scholastic performance that will attract the people who build businesses and create jobs. It will attract people whose children have already finished public school or who can afford tuition at a private college. The entrepreneurs and business people with young families will want their children to get the best schooling possible, in an environment where there is attention paid to education and a culture of learning. Yes, any student who is bright enough, and motivated to learn can succeed. But many children need to experience a culture of learning before they ‘get it’ and realize their own potential. Parry Sound really doesn’t offer that type of environment outside of the school setting, and this may contribute to the dismal academic performance of the schools.

We do have a culture of success in Town when it comes to athletics, particularly hockey and curling. The area has produced a number of individuals who have succeeded on both the Canadian and International sports stage. How about intellectual and business success? We have a Bobby Orr Hall of Fame to honour individuals who have made important contributions, or achieved excellence, in athletics. We have multiple sports leagues that are effectively Town subsidized. What do we have with regard to achievement in learning and academics and business?

Building a culture of academic and intellectual achievement will not come overnight. But a little bit of investment can go a long way. What about having the Town provide additional support to the Museum and Library so they can offer programs that will stimulate and encourage children, and adults, to learn and establish a culture of education and success. Might there be a Saturday morning class at the Museum where interested kids can learn to code? Or perhaps learn about the science and ecology of the environment? What about some sort of a class at the Library where children can learn a new language that will open their eyes to the bigger world and give them a leg up when they move on to the next stage of their education and life? What about harnessing the potential of Canadore to not only offer adult education but also advanced subjects for children on Saturdays and after school.

If we fail to invest in our youth we will continue to fail to attract the kind of people and businesses that will contribute to the growth of Greater Parry Sound, not just Parry Sound but also Sequin, McDougall, Carling and McKellar. The default is to become a seniors centre – Elliott Lake South, where the focus is on entertainment and health services rather than education and learning. There’s nothing wrong with that. But understand that it doesn’t have to be an either-or situtation. We have a choice, and how we spend our tax money will make all the difference. How can parents who have never been exposed to the opportunity of education and learning be expected to share that experience with their children? If a father or mother played hockey it’s likely their children will be given the opportunity. If they danced, or curled or played soccer – ditto. And if they haven’t succeeded at school what can they pass on? It truly does take a village to properly raise a child.

So let’s give the Library and the Museum some more money and see what they can do to create an environment of learning and achievement. In the big scheme of things it’s a nickels and dimes investment that can pay back loonies and toonies.

Note: I realize that the neighboring communities have responsibilities for both the Museum and Library, but let’s not depend on them. They are too busy worrying about the loss of the subsidy for OPP policing services they have received for years. To quote Joni Mitchell’s Big Yellow Taxi, “You don’t know what you’ve got ’til it’s gone”. But let’s hope that they stop looking at high speed internet as their only priortity and consider more support for the museum, the library and a regional culture of achievement in athletics, academics and business. That sounds like good economic development policy.

It’s not just Parry Sound students who are putting up those academic scores.

A Chilly Environment for Learning? (Parry Sound in Black & White) 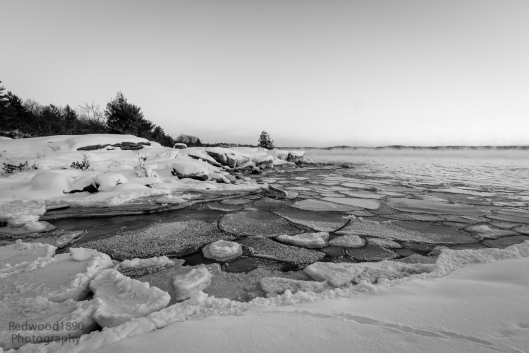