Strangely enough this week’s agenda doesn’t list the letters received by the Town, although they are included in the full agenda package. I have summarized them to ensure there is appropriate transparency. I wonder though if there are scheduled deputations that have not been listed. We’ll see on Tuesday.

We will see fluoride get the final punch out this week. There is no reason to believe that Council will fail to approve the by-law at this point (10.4.1). Staff and the Waterfront Committee is proposing that the shade structure on the Town Dock be replaced. I offer comments below (9.2.3). It looks as though we will have an ice cream truck rolling through Parry Sound if the request is approved by Council (9.5.2). And it seems as though there will be more signs (9.2.1).

4.1 – Parry Sound Area Chamber of Commerce. The chamber has provided notice that they intend to leave their current Town leased location on 70 Church St. (CN Station) effective the end of April 2016.

None noted on the agenda as circulated.

9.2.1 – 114 Bowes Street – Application – Council Approved Sign(s). Resolution. That the Chief Building Official is authorized to issue a permit for a group of Facia Signs at 114 Bowes St., according to Schedule “A” attached, That the permit will be for an indefinite period, and that the permit does expire if the group of signs is removed. Signs, signs, everywhere there’s a sign. It looks as though there will be more signs on the south end of Town, presumably to catch the attention of those rich tourists. The application requires the approval of Council because the applicants want relief from existing regulations that limit the location of signage. It proposes a ‘collage’ of five separate signs. See the image at the end of this post for a sense of what we might expect based on what already exists. I hope to be surprised, but it’s hard to do ‘collage’ when space is money.

9.2.2 – Site Plan Amendment Application – Rona – 115 Bowes Street. Resolution. That Council approve an amendment to the Site Plan to permit a 334 square metre accessory storage building at 115 Bowes Street (Rona) as substantially identified on the attached Schedule “A”. Soon to be a Lowes?

9.2.3 – Town Dock Gazebo – Design. Resolution. That upon the recommendation of the Waterfront Development Advisory Committee, Council accept the proposal and gazebo design from Cedarland Homes per Schedule ‘A’ attached; and That Cedarland Homes’ contribution be recognized through signage. Signage and gazebo structure to remain in place for a minimum of 5 years; and That the disassembly/removal of the existing gazebo be advertised with the proviso that whoever disassembles/removes the gazebo can retain the wood. If there is no response to the advertisement to disassemble/remove the existing gazebo for the wood, then it will be removed to landfill. It looks as though this is a done-deal. I’m hoping that the existing structure can be dismantled and erected somewhere else. It’s history folks, and once it’s gone, it’s gone. This may also be another case of demolition by neglect. Had the Town budgeted even a few bucks annually to maintaining the structure it would not be ‘condemned’. Pay attention – the old Fire Hall will be the next historical structure to be ‘condemned’ and require the Town to tear it down.

10.1.1 – G-Tel Utility Locate Agreement. Being a by-law to execute an agreement with G-Tel Engineering to undertake utility locates.

10.4.1 – By-law for the Removal of Fluoride from the Town of Parry Sound’s drinking water system. Being a by-law to Discontinue the Fluoridation System for the Public Water Supply that services the Town of Parry Sound and that portion of the Municipality of McDougall that receives treated water from Parry Sound. That’s it for fluoride in the Town water, for at least two years.

There is more on the agenda and I encourage people to check out the agenda and the full package at the Town’s site, or as hosted here. See you Tuesday night. 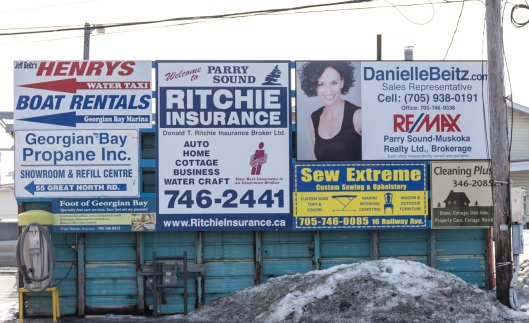