Some quick thoughts and numbers from yesterday’s Town of Parry Sound municipal election. The only real surprises to be expected was who the two new councillors would be. I picked one with my vote but not the other. I wish both of them the best of luck.

Here are some numbers from the past three elections that suggest a considerable degree of consistency in terms of the vote totals. 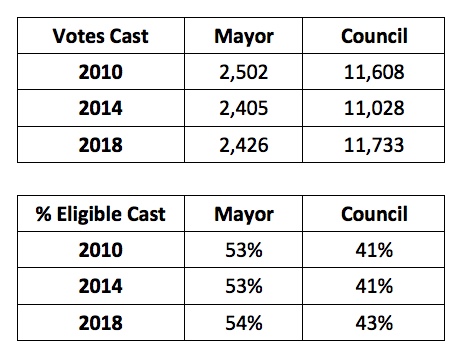 In almost all respects the voting pattern for 2018 was almost the same as for 2010 and 2014. A little more than 50% of eligible voters actually cast a vote. This is a bit disappointing given that it has become much easier for people to vote in the last two elections.

Once again, a large number of votes for Councillors were not cast, an estimated total of 2,800 votes were withheld by folks who voted for the mayoral candidates. Speaking to a couple of voters I found that one voter chose to vote for two councillors only in hopes of helping their chosen candidates. The other person used only 5 of their 6 possible votes because they did not have a good sense of who else to support.

In 2018 once again, 1,000-plus votes was the target for any individual hoping to be elected to Parry Sound Council. This was despite a total of 14 candidates in 2018 versus 11 in 2014 and 10 in 2010. Looking at the chart below the distribution of votes is almost the same for all three years. The difference this year was that the number 3 and 4 elected councillors did so with a lower number of votes relative to the earlier years, 1,000 to 1,100 rather than the 1,200 to 1,400 votes of the past. There is a bit of a message there that the candidates need to understand and act upon if they hope to retain the support of the voters. 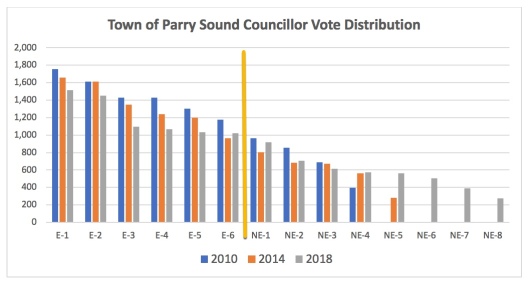 This election reinforces my observation in an earlier post that the votes to get elected as a councillor in Parry Sound are there to be captured, at least 2,800 by my estimate, without taking a vote from anyone else. But that takes much more good work than can be accomplished solely with social media and an unspecific promise of change.